In the Swarf! article, it was observed that coarser hones remove larger pieces of metal.   At the same time, we should expect that a finer hone will contain a higher density of abrasive particles.  The overall rate of metal removal will depend on both the size and number of metal swarf particles removed over a given distance traversed by the blade on the surface of the hone.

Obviously there are other factors to consider, the pressure applied, the shape of the grit particles (and how they wear with use) and the mechanical properties of the steel, to name a few.  The obvious approach is to simply measure the rate of metal removal on a variety of hones to see what happens…

In this experiment, a small piece of hardened carbon steel was used as a workpiece to compare the abrasion rate for a variety of hones.  The sample was cut from the end of one of the vintage straight razors used in other experiments for this blog.  This is not intended to be a systematic study with precise control of the pressure and stroke, but rather to simply to determine ballpark numbers for the metal removal rate for a few hones over a range of rated grits.

It should be expected that the rate of material removal will increase with the downward pressure applied.  In this experiment, the workpiece was “scrubbed” back-and-forth by hand with approximately 500g equivalent force applied.   The force and surface area were chosen to be in the typical range used for honing a straight razor.  The angle of the workpiece was varied relative to the direction of motion every ten strokes to minimize abrading parallel to existing scratches.  At varying intervals, the workpiece was weighed with a 1 milligram precision scale to determine the change in mass due to metal removal.

The pressure was chosen to be typical of that used with straight razors, however it is certainly less than would be applied to remove substantial amounts of steel when free-hand sharpening a very dull knife.  Since pressure is inversely proportional to surface area, it should be expected that a similar pressure to that used here will be achieved when flattening the back of a broad chisel or plane blade.

Each of the waterstones (Sigma, Shapton, Chosera, King) were lapped with an Atoma 400 (or 140 in the case of the 240 and 320) diamond plate to produce a fresh surface, and each stone was lapped again after every 500 strokes of the workpiece.  All of the diamond plates have all been used sufficiently to be broken-in, but not nearly worn-out.

The results for the Shapton Glass 16k hone are shown in the plot below. The average rate of removal was determined by fitting the data to a straight line.  Steel is removed at a rate of 2.7 micro-grams per stroke, or 2.7 milligrams per thousand strokes.  Based on the dimensions of the workpiece, each milligram decrease in mass corresponds to 2 microns of steel abraded.  One micron of steel is removed every 200 strokes. 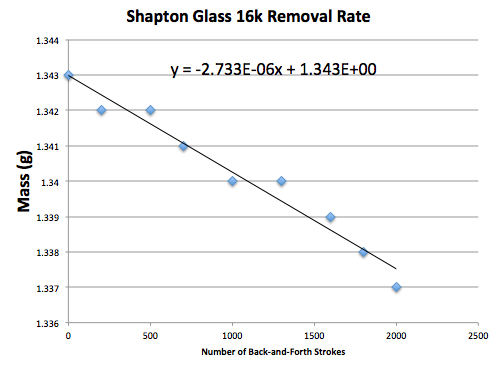 The measurements were performed on a variety of hones and grits, and the results are tabulated below.  The rate is given in micrograms per stroke (1 microgram corresponds to 2 nanometers) and in microns/ 100 strokes.

For the waterstones, there is essentially no measurable difference (within experimental uncertainty) for the abrasion rate of the Shapton 320, Chosera 1k,and the Shapton 2k and 4k hones.  These four hones removed metal at the same rate.  The 8k and 16k Shaptons removed metal at about 1/3 the rate of the coarser hones.  The removal ratio between the King 1k and 6k hones is much higher than observed with the various grits of Shapton hones, however the King stones are rated for their actual grit size rather than their “effective” grit size.

Only two of the waterstones tested “became muddy” during use, the Sigma 240 and the the King 1k.  These two hones were also among the fastest metal removers.

The results shown in the Swarf! article demonstrated that the dimensions of the removed metal particles do increase with the rated grit of the hone.   However, the rate of metal removal will depend on both the size AND quantity of the metal debris.  The results here corroborate the idea that the finer hones remove smaller particles, but that they can remove proportionally more of those particles, for an overall similar removal rate.

The Atoma diamond plates produced the same removal rate with 140 and 1200 grit with the 400 grit performing at half that speed.  Having fewer contact points than the DMT plates produces a higher pressure at each diamond for a given force.

The four DMT plates were the same ones used in the Diamond Plate Progression where we observed the seemingly anomalous inverse relationship between grit and keenness.  The measured removal rate displays the same inverse relationship with the “finest” hones being fastest and the “coarsest” hones being slowest.  Astonishingly, the DMT Coarse (325) removed steel at the same rate as the Shapton 16k glass stone.  Among the fastest hones were the DMT EEF (8k) and DMT EF (1200), and this is almost certainly due to the presence of oversized diamonds in those hones.  The slow removal rate for the Coarse and Fine plates indicates that there is not sufficient pressure for the full diamond particles to abrade the surface, rather that abrasion is dominated by small asperities on the surface of those larger diamonds.

The experiment was repeated for a few of the hones, but with an estimated 5 times the force applied.  At approximately 2.5 kg force equivalent, this is the limit of what I could apply with two fingers and still keep the workpiece moving  smoothly across the hones.

At this higher pressure, we begin to see the coarse hones outpace the finer hones.  Even still, there is little advantage in the 320 and 1k grit stones over the 4k, when the greater apex damage caused by those coarse hones is considered.

There is a simple explanation for these results: coarse stones are only faster if sufficient pressure is used.   In the study and literature on the topic of grinding and wear (tribology) the terms “sliding, ploughing and cutting” are commonly used.  There is a critical pressure required for an abrasive to cut into the workpiece, otherwise it will simply slide without removing metal.  Efficient grinding occurs when the particles are cutting.   If the exposed abrasive becomes worn, the contact area increases and the effective pressure decreases (for a given applied force) and we will move from cutting to sliding.   In performing these measurements, I did observe an increased abrasion rate on the coarsest hones immediately after lapping, but this was typically short lived (less than 50 laps) and had minimal influence on the measurements.

As usual, we should be cautious in generalizing these results.   It is not my intention to “rate” various brands and types of hones.  However, this is not a difficult experiment for others to perform themselves.

30 responses to “Abrasion Rate vs “Grit””