In The Honing Progression entry, an example of apex geometry refinement during honing with Shapton glass stones was presented.  A slow, but linear improvement in sharpness and keenness was observed, consistent with the intuitive view that reducing abrasive size (increasing grit) leads to a sharper, keener and more linear edge, along with a more polished bevel.  In the current discussion, examples taken from honing on diamond plates will show that the reality can be more complex.

There are two primary differences between diamond plates and conventional water stones; the diamond plate grit is more firmly bonded, and can exert a greater lateral force without dislodging, and second, unlike a water stone, fresh grit particles are not being continuously exposed with use on the diamond plate surface.  It must be anticipated that the effect of a particular diamond hone will depend on the existing condition of the surface; whether the stone is broken-in, worn, glazed, etc.  For this reason, the examples here cannot be generalized to all diamond hones.

A set of 4 diamond plates were used for this experiment; DMT coarse (325), fine (600), extra-fine (1200) and extra-extra-fine (8000).  The four plates were in good condition, and were “broken-in,” all having been used for more than one hour polishing steel.  A carbon steel razor with spine-apex angle of 16.5 degrees (inclusive) was honed edge-leading with pressure in the range normally used for honing straight razors; beginning with a force-equivalent of a few hundred grams, reducing to near “weight of the blade” pressure at each stage.  The observed results were confirmed repeatable, indicating relative insensitivity to variations in pressure, stroke type and number.

Comparing side view images, all at 5000x magnification, shows that the roughness of the bevel actually increases with grit, rather than decreases as was observed with the Shapton water stones.  The scratches are wider and shallower on the lowest grit hones, becoming progressively deeper with increasing grit.

5000x magnification side view after honing on the DMT 325.

5000x magnification side view after honing on the DMT Fine (600).  Scratches are narrower but deeper than those in the DMT Coarse (325) honed bevel. 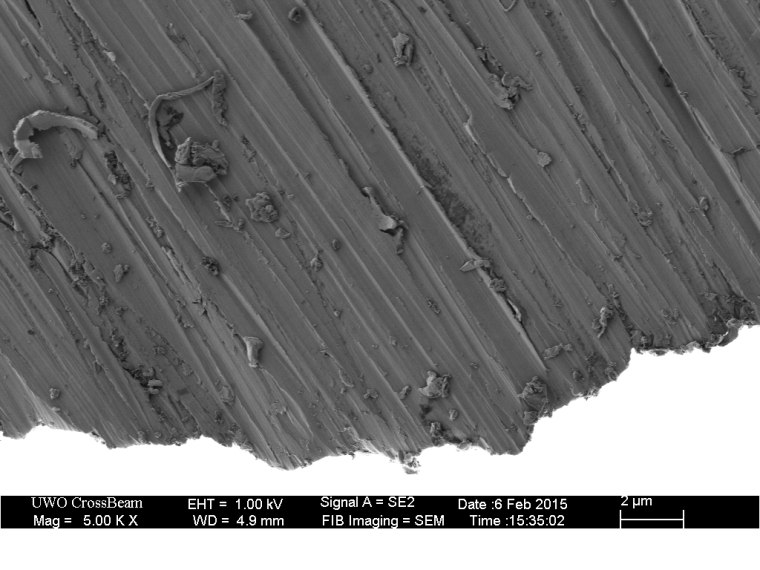 5000x magnification side view after honing on the DMT Extra Fine (1200). Scratches are both wider and deeper than those from the coarser grit hones. 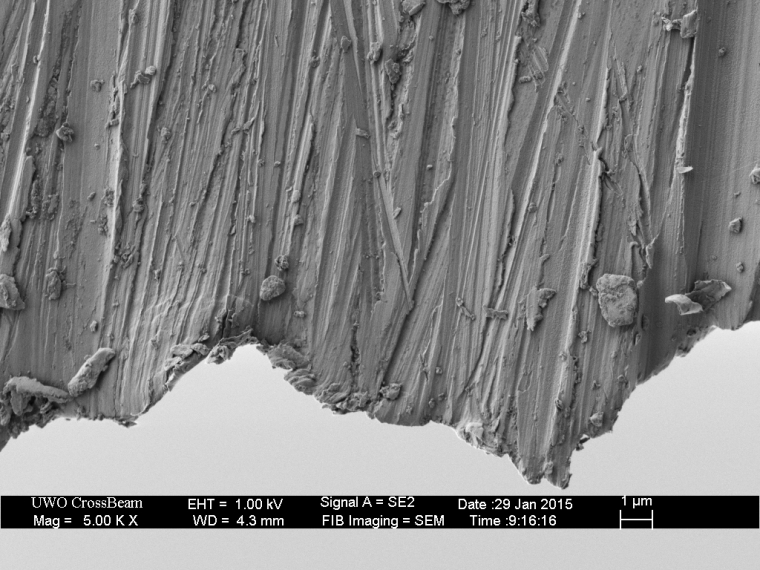 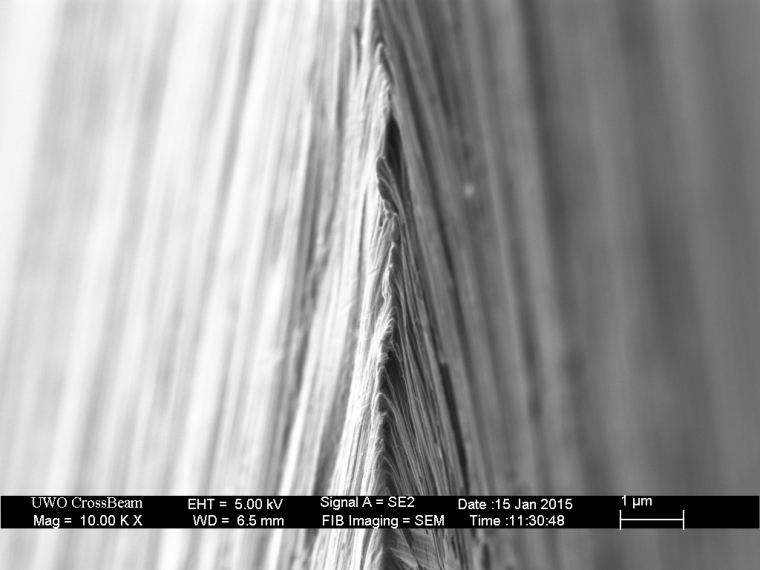 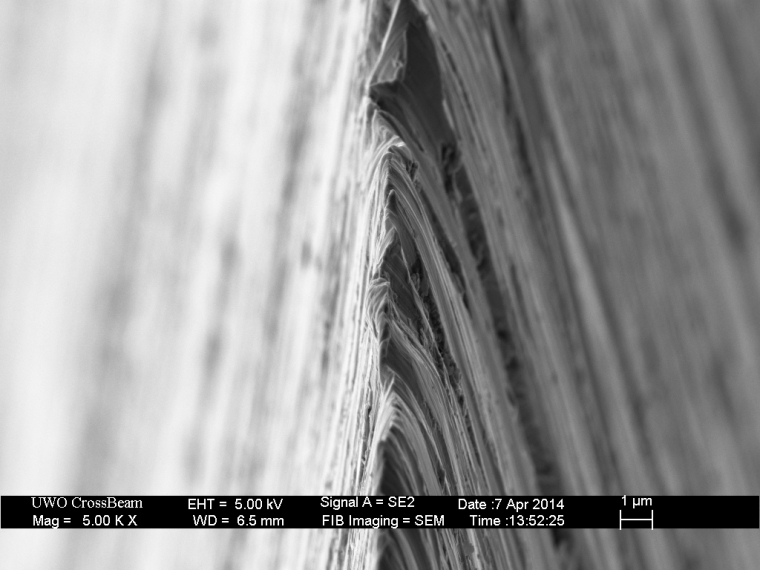 5000x magnification side view after honing on the DMT Extra Fine (1200). Note that the magnification is reduced from the 325 and 600 grit images to better show the non-uniformity.

3000x magnification edge view after honing on the DMT Extra Extra Fine (8000). Note that the magnification is further reduced from the preceding images to better show the relative irregularity of the apex.

The edges were also cross-sectioned and imaged to determine the near-apex bevel angle. 3 of the 4 edges display similar micro-convexity, with the 600DMT edge being a foil-edge burr.

10000x magnification of the apex cross-section after honing on the DMT Coarse (325). Edge width is less than 100nm. 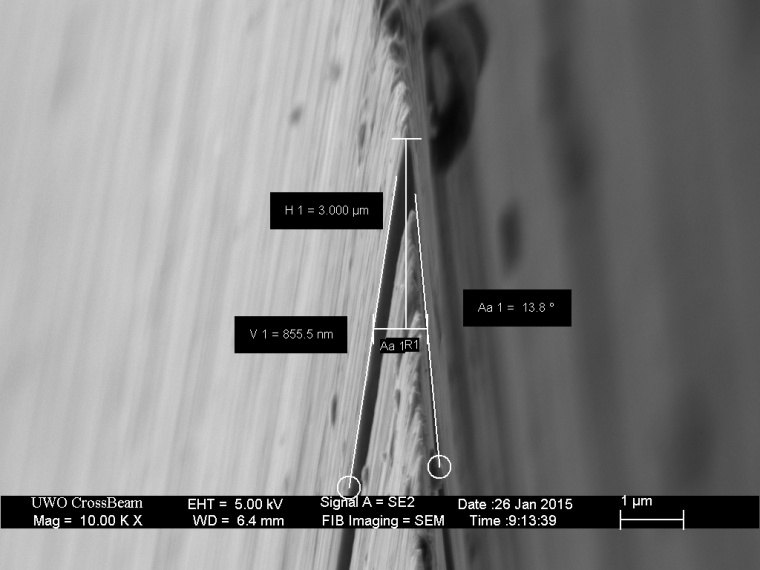 10000x magnification of the apex cross-section after honing on the DMT Fine (600). Edge width is approximately of 100nm. The apex angle is approximately 14 degrees, measurably less than the spine-apex angle of 16.5 degrees – a foil edge by definition. 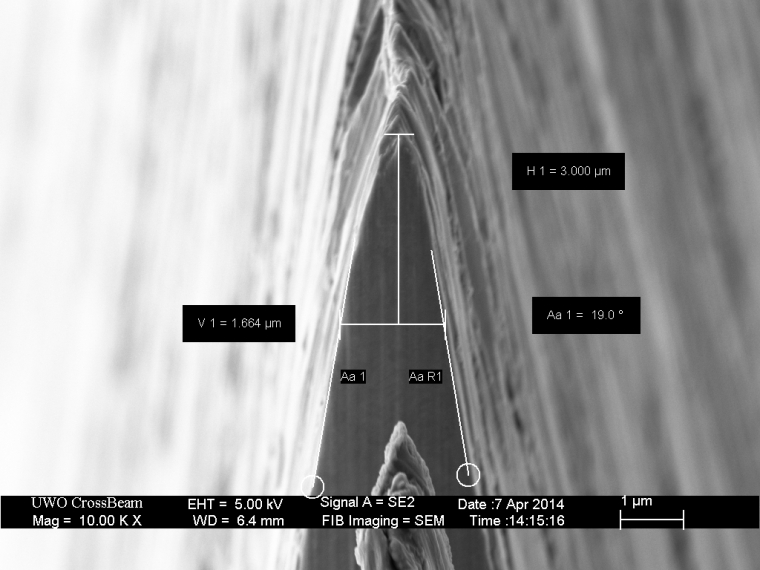 10000x magnification of the apex cross-section after honing on the DMT Extra Fine (1200). Edge width is sub-100nm in places due to convexity of the last micron of the apex. The bevel angle 3 microns from the apex is 19 degrees, but is significantly larger nearer the apex.

10000x magnification of the apex cross-section after honing on the DMT Extra Extra Fine (8000). Edge width is not quantified due to the irregularity of the apex.

The reader could be forgiven for concluding that these results make no sense, that the author has no honing skill, that these particular plates were defective, that razors are completely different from knives, or any other dismissive explanation.  Often, results that contradict our intuitive expectations are a key to identifying and improving our deficient understanding.  Certainly it would not be prudent to generalize these results and a full understanding of these observations will require further experimentation; however, a few insightful comments can be made at this time.

In order to form a scratch, sufficient pressure must be exerted by the particle (or a corner of the particle) to exceed the yield-strength of the material.  Since pressure is inversely proportional to contact area, a larger smoother particle will require a greater force to scratch than a smaller or more irregular particle.   The observed scratch profiles indicate that the Coarse(325) and Fine(600) diamonds are too large (and smooth) to individually penetrate the steel (at the force applied), instead only the asperities on the surfaces of the diamonds abrade the bevel.  This is not a burnishing effect; metal is being removed in these examples.  The Extra Fine(1200) and Extra Extra Fine(8000) diamonds are small enough or sharp enough to penetrate and form discrete scratches.  The smaller surface area of those contact points results in a higher pressure (force/area) and therefore greater penetration and deeper scratches. In the pasted strop-part 3, it is shown that the transition from a triangular profile to micro-convexity can include the formation of a foil edge.  For this reason, the observed foil-burr in the 600 grit example is not inconsistent with the apex profiles observed after the other three grits.

It is surprising to observe micro-convexity on an blade honed on an incompressible, flat surface (without slurry).  Further, the amount of micro-convexity does not vary with grit size; we observe nearly the same near-apex profile after the 325 as we do at the higher grits.  One possible explanation can be found in the fact that plastic deformation occurs at the apex during honing.  The amount of plastic deformation is a function of the steel and bevel angle, not of the of the grit size on the honing substrate.  A likely mechanism for this result is shown schematically in the images that follow.

The apex is deformed away from the hone by a glancing collision with a diamond particle.

The metal is pushed beyond the bevel plane and is abraded during the return stroke.

With abrasion of the deflected apex becomes micro-convex.

When the bevel is convex, the apex rides above the surface and is somewhat “protected” from direct collision with abrasive.  This can enable the production of an edge much keener than might be anticipated for a particular grit size.

Almost any measure of sharpness or keenness of these four blades would show a reduction in cutting efficiency with refinement on higher grit plates.  The expectation that low grit edges are “toothier” may lead someone to believe that a toothy edge is superior in some applications.  However, the micrographs show no evidence of “toothyness” in the 325 or 600 grit edges.  In fact, those edges appear highly refined.  Whether the 1200 and 8000 grit edges could be qualified as “toothy” is up for discussion.  Certainly the toothy-blade myth is something to be investigated further.

30kX magnification cross-section view of the apex following honing on the DMT 325.

For comparison, a blade was honed on an Atoma 400 diamond plate.  This plate was used exclusively for lapping waterstones, resulting in a rougher, less polished surface.  Images of the blade display a scratch pattern consistent with that irregular surface; the scratches are much narrower than the size of the diamond particles.

Edge view image at 10kX magnification of a blade honed on an Atoma 400 hone. 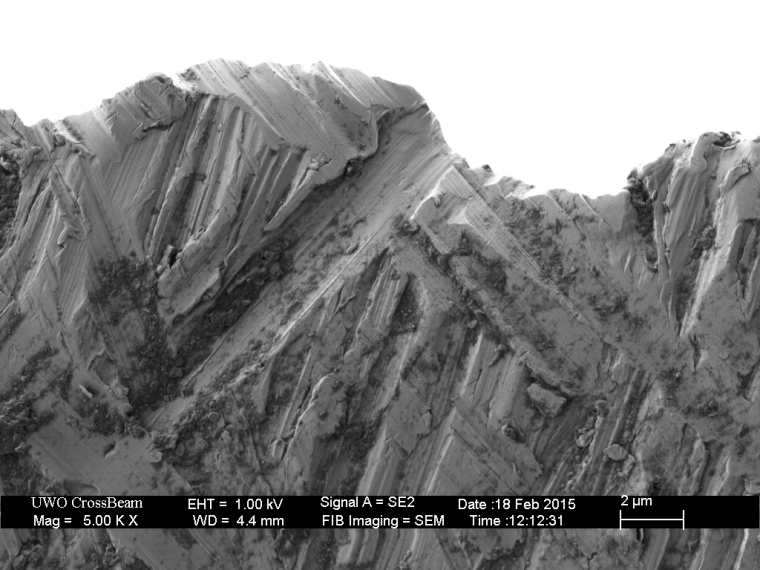 Side view image at 5kX magnification of a blade honed on an Atoma 400 hone.

51 comments for “The Diamond Plate Progression”